Premature to Lock our Paris Commitment into Legislation

The retiring parliamentary commissioner for the environment, Jan Wright, has suggested New Zealand should lock down its commitments to greenhouse gas emissions, as made at COP21 in Paris in 2015 into legislation.  In this article, I suggest it is premature to lock the commitments down into legislation as:

We have already seen the US pull out of the COP21 agreement, in its current form and we are seeing other countries start to face political backlash on the cost of meeting COP21 commitments.  Although the need for a multilateral international agreement on mitigation of climate change probably won’t go away the exact form of the agreement is likely to change.  The agreement has already gone through multiple evolutionary stages from Copenhagen, to Kyoto to Paris.  And at each iteration progress has been made.  But it is far from clear that Paris is the final stage in this evolutionary process.

The key problem facing these agreements is how to get everyone to agree on how the costs (of mitigating climate change) should be shared among the winners and losers (of different levels of climate change).  What many people fail to understand is that the impacts of climate change are not universally spread.  Some countries (such as Canada and Russia, and to a lesser extent NZ) have relatively little negative impacts (and up to a point some positive impacts).  Whereas other countries, such as India, Indonesia and to a lesser extent China, have more negative impacts.

As you would expect the impacts are a function of how hot the country currently is, which is partly a function of its latitude.  An excellent study of the distribution of climate change impacts internationally was done recently by the centre for research on energy and environmental economics and policy http://documents.worldbank.org/curated/en/175901467994702565/Estimation-of-climate-change-damage-functions-for-140-regions-in-the-GTAP9-database.

Costs and Benefits Not Well-Aligned in COP21

Taking this study and mapping the impacts of climate change to those causing it most (under the current COP21 agreement, cumulative emissions to 2040) gives the following two graphs:

Countries Most Impacted by Climate Change 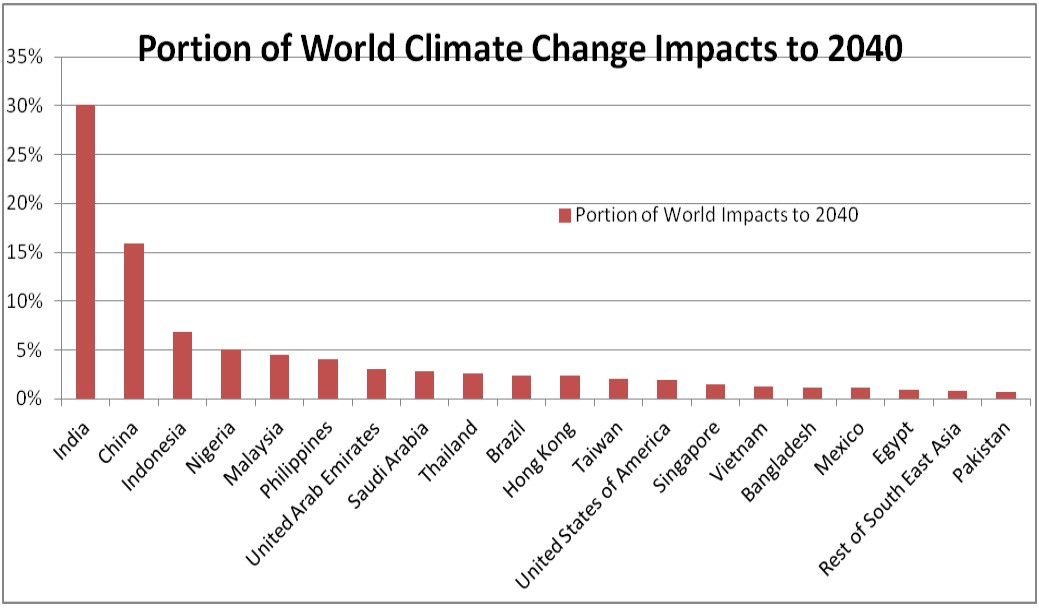 As you can see the causes and impacts are not well aligned under the current agreement.  That is those that suffer the most impacts are (mostly) doing least to mitigate climate change (by reducing their emissions).

Which does at least help us understand why the US thought the current agreement was not a good deal from their point of view (they get very little out of it relative to their cost) and why China (and India) are keenest to keep the deal alive (someone else pays for them to benefit).

As I mentioned in my previous article (on the need for a cost-benefit study of our COP21 commitments) maintaining political support for policy gets difficult when the costs start to bite and there are no obvious benefits.  This is already starting to show up in the UK where consumers are starting to object to the 150 pound (NZ$300 approximately) per household per year ‘Green tax’ they are paying on their electricity bills.  A sum that is likely to go up considerably for them as more and more expensive offshore windfarms etc get built.

By way of comparison, the equivalent ‘Green tax’ for NZ’s COP21 commitments is likely to be of the order of $1,500 to $5,500 per household per year.  Most of which will be spent buying offshore carbon credits.  I suspect maintaining political support for that level of taxation for no obvious advantage will be challenging.  (For details of the costs of our COP21 commitments see my previous article).

Don’t Set Commitments Into Legislation When Things Might Change

So, in summary, I don’t support Jan Wright’s call to enshrine our COP21 commitments in legislation when:

What are you looking for?